Now You Feejee, Now You Don’t

I have been fascinated with sideshow gaffs for most of my life. There is something genius about forming a creature that is seemingly impossible to imagine occurring in nature. You are the creator of something brand new and with a little deception, you can convince others to pay money to satisfy their curiosity about the validity of your masterpiece. I imagine it is much like giving birth sans the lies and money (depending on the situation).

One of the most famous of sideshow gaffs is the Feejee Mermaid. This beauty typically consists of the top half of a baby monkey fused to the bottom tail of a fish. The original gaff appeared in P.T. Barnum’s American Museum in New York in 1842 but suddenly disappeared. With the original vanishing, this conveniently afforded other attractions the opportunity to copy the popular exhibit.

Where did P.T. Barnum snag such a fabulous gaff?

Feejee mermaids were actually works of art by fishermen in Japan and the East Indies. The mermaids were even used in many religious ceremonies. The original is said to have been created around 1810 by a Japanese fisherman and then bought by Dutch merchants only to be sold to Samuel Barrett Eades, an American sea captain, in 1822 for $6,000. That’s basically the equivalent to $117,000 in 2016! Eades realistically couldn’t afford the mermaid but sold his ship (well, not technically his) to get the money, hoping he could make a quick buck exhibiting it in London. Sadly, Eades was not much of a showman and ran into several troubles with the mermaid. After he died, his son sold it to Moses Kimball. Kimball investigated the authenticity of the mermaid and he was assured it was most definitely a fake.

Why would P.T. Barnum want something that had been declared fake?

Here’s one of my favorite thing about gaffs. It doesn’t matter whether they’re real or not. It’s the mystery. And building on that curiosity takes some skill in the form of brilliant marketing.

Barnum leased the mermaid from Kimball and hired a fake naturalist who declared the creature was authentic. He also put illustrations of bare-breasted mermaids in the newspapers to advertise the exhibit. Now, the public needs to see the creature for themselves.

Without further ado, I present to you the real Feejee Mermaid! Behold! 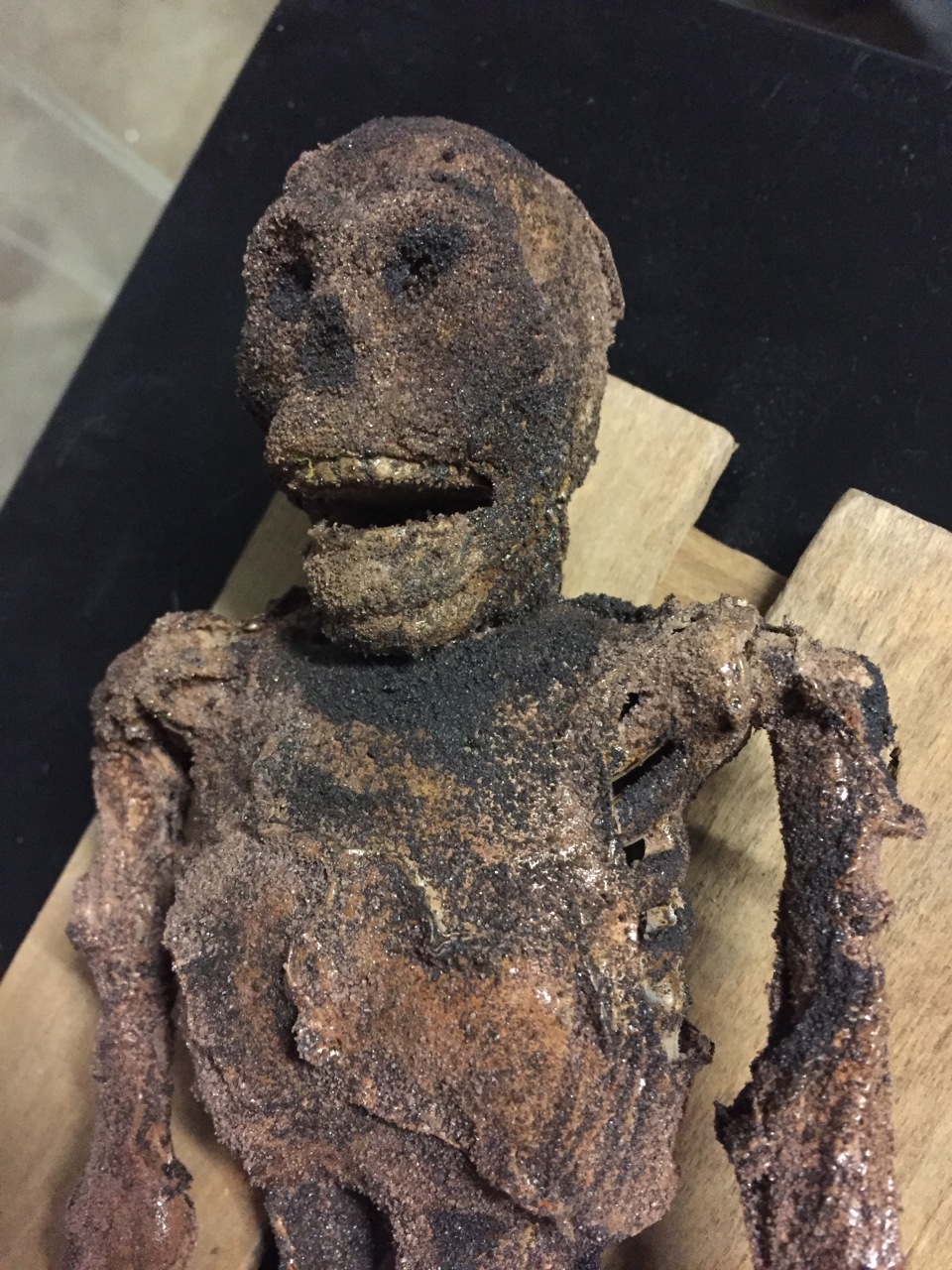 Well, this was my attempt at the Feejee Mermaid gaff. This lovely little thing is on display in a fish tank in the house, but also made its debut at the Lakeshire Freakshow this Halloween. Are you curious at how this was accomplished? Should I leave you in suspense?

Perhaps. Or perhaps not.

I bought a cheap, plastic skeleton after last Halloween for this very purpose. To start, grab a heat gun and some plastic wrap. You can add the plastic wrap around the body to form “flesh” and then use the heat gun to melt it. This is basically how plastic skeletons are “corpsed” to look like decaying bodies.

Now, spray paint the body to have a uniformed look. I used a light tan, then bits of a reddish brown to give some depth. After that has dried, break out some wood stain and a sponge brush.

Horrific, right? At this point, she’s disgusting. I don’t want her corpsed, but rather mummified. For this, I grab some red sand and sprinkle it on her. You can go back and add some wood stain on top to give the mermaid more dimension. Viola!

As you look at this creation, are you sure the finished product is the same as the first one? Maybe I produced this elaborate illustration simply to create doubt in your minds. Perhaps I have the original P.T. Barnum Feejee Mermaid. Next Halloween, you should come by and see for yourselves at the Lakeshire Freakshow.

← Should You Need Us?
Learning to Fly →